My First Book: Religion Under Siege?

Some of you might have noticed a couple of months back on Malaysiakini a bunch of ads for this book, Religion Under Siege?. For much of my summer break last year, I worked on this book together with my good friend, Nathaniel Tan. Although Kinibooks officially published it early this year — I believe it might have already hit bookstores — this Sunday, the 4th of May, is when it will be officially launched.

This was not a project I was particularly keen on at first. Religion in Malaysia is a complex and sensitive issue, and I didn't feel comfortable editing a book stitching together so many different points of view about religion — many of which, fundamentalist and secular, I felt to be in error. However, its original scope was merely the Lina Joy case, something I felt we could easily focus on. It was only after we realised there was surprisingly not a lot to say about the case that we expanded the focus of the book. I think it has worked out quite well.

The book is essentially a quick and dirty guide to religious issues in the country over the past five years or so. Almost everything sensitive, from freedom of religion to the Islamic state, is in the book. Nat and I worked hard to ensure we covered as many points of view as possible. It was hard, but we pulled it off. 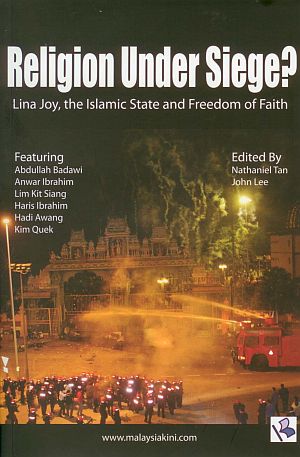 The bulk of the book is actually material that you can find online, from press statements to letters to the editor of Malaysiakini to blog posts. However, the added value of the book is not having to hunt these opinions down — you can easily flip to what Abdullah Badawi or Anwar Ibrahim have to say about a specific religious issue. There is a lot of crap out there about religion in Malaysia; I know, because I had to wade through it to find the good stuff for this book. It can sometimes be hard to find out what the other side thinks, and why they think it; we have tried as hard as possible to present clear statements and arguments from both sides.

There are of course other things which make the book worth buying. For one, heck, it's my book, and Nat's too. If you like what we write but don't have much use for the book, then consider it a donation to us for our websites, an incentive to continue our work. (I don't think we really need the incentive, but hey, it's the thought that counts.) But for another, we've added some unique material you can't really find elsewhere.

A good overview of the situation in Malaysia is quite hard to come by. You can easily find biased views purporting to adequately cover the situation, but they rarely do justice to what the other side says. In addition to presenting the opinions of both sides, we have included brief introductions to every section of the book, so you can know exactly what the state of things is when religion is the issue.

The other added value stems from a clear explanation of what the Lina Joy case is about. Not many people have read the official judgements handed down by the Federal Court; at best, they have read news articles summing up the opinions in a couple of paragraphs. I personally read both the majority and dissenting judgements, and prepared a summary of both of them. They might be slightly hard to follow if you are not used to the legal way of thinking, but at least the language is clearer and freer of legalese than the originals. I tried as hard as I could to make the essence of all judges' reasoning clear.

If you have not got the book yet, you can still buy it from Kinibooks. Alternatively, you could attend the official book launching, at the Central Market Annexe in Kuala Lumpur this Sunday. The Kinibooks website has the full details. Unfortunately, I will not be there; being an overseas student has more cons than not being able to eat Malaysian food. However, Nat will definitely be there, giving a brief talk followed by a Q&A session. After that, he will be autographing books, so if you would like a signed copy, this is your chance. (If you want one from me, email me and we'll see if we can work things out when I get home for the summer.)

I hope you'll be able to attend the book launch, or at least buy my book. But even if you can't, I thank you for taking the trouble to read what I have to say. Regardless of what you believe (or disbelieve) in, God bless you.

If you liked this article, check out these related articles:
Here are the most popular articles in Malaysian Society:
If you'd like to keep informed about updates to the site, consider subscribing to our web feed:
Want to know when new articles are published? Subscribe to our newsletter:

Quoth the webserver...
My own education has been entirely controversial: that is why I know what I am writing about; and appear eccentric to dogmatically educated Old School Ties whose heads are stuffed with obsolete shibboleths.
— George Bernard Shaw